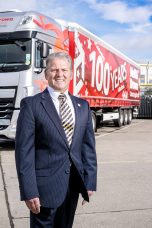 It was one hundred years ago when the first Neill & Brown horse-drawn wagon rumbled out of Hull Docks with its cargo of timber.

Today, and now known as Neill & Brown Global Logistics, the company’s gleaming modern equivalents of those first wagons are giving road users worldwide a reminder of the historic moment.

Based in Hessle, the company has invested almost £1m in new vehicles, which bear specially designed livery celebrating the firm’s 100 years in business.

The company can trace its beginnings to the moment when current CEO Peter Brown’s great uncle met a Mr Neill and they decided to go into business together, moving timber from Hull docks.

In the century since then, the company has grown steadily to provide UK, European and global logistics services, including warehousing, distribution and abnormal load services for most sectors of business and industry.

The company’s main market is Europe, in particular Italy and Belgium, but it also has growing business in the US, in India and in the Far East through its Hong Kong office and Far Eastern agents.

As a result, the business has seen continued expansion over the past few years, with employee numbers rising from 75 to more than 130.

Managing Director Colin Moody said: “We are very proud of our history and it’s quite unusual for a logistics company still to be in business after one hundred years and to be such a strong business.

“We plan to continue our growth but we are determined to keep control of the process, to do it on our terms.

“We could order more vehicles but we do not want to grow too rapidly because it is important for us to maintain the quality of service that our customers expect from us.

“One of the big considerations for us as a company that travels to Continental Europe is the impact of Brexit and we see it from the side of both exporters and importers.

“My view is that it is likely to cause delays, something that we have to factor into our operations because these days everybody wants things delivering ‘just in time’.”

However large the company grows, its commitment to the local community will remain strong and the business already supports a range of charities and events including Hull’s year as City of Culture.

The firm was the first to pledge money in support of the festival. Having pledged £17,000, the firm now has Bid Angel status.

The company has found a very personalised way to celebrate both City of Culture and its own centenary, having launched a campaign under the title #OurStars to honour its staff and also those who have contributed to the character and success of the city.

Throughout the year, they will be pictured with a specially commissioned Hollywood Star themed frame, published on social media and on a special ‘hall of fame’ gallery on the company website with featured figures including Amy Johnson, William Wilberforce and Luke Campbell.

The company is aligning its campaign to the Hull 2017 themes Made in Hull and Roots and Routes and hopes to have a large hall of fame on its website by the end of the year.

In addition to famous names, company employees are featuring, including warehouse coordinator Joan Stanley, whose father was a trawler skipper, Danny Geering, who is the firm’s longest serving driver having moved from London to Hull thirty years ago, and former footballer Steve Moran, a driver with the company since 2003.

You can read the full article online here