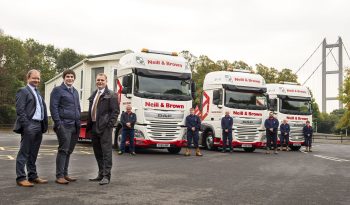 The company, which is creating five new jobs in the process, has added three new trucks to its existing fleet of abnormal load vehicles to serve additional contracts and meet continued growth in domestic and export markets.

‘This is a significant investment reflecting our desire to meet current customer demand and demonstrates our optimism about future growth,’ said Peter Brown, CEO of Neill & Brown.

He said that the region’s caravan manufacturing industry was enjoying a resurgence following its near collapse amidst the recession. “This has resulted in an increase in business for us in the transport of new mobile and static caravans within the UK,” he added.

‘We are also seeing increased secondhand sales to Europe, particularly to Poland, and to Belgium, the Czech Republic, France and the Netherlands.

‘There is additional activity from construction clients for the movement of site cabins and modular buildings, and we are also expecting demand from the renewables sector.”

The new additions have increased the Portable Movements division’s fleet of specialist vehicles from six to eight, including one like for like replacement.

The investment means that Neill & Brown’s Portable Movements division will be strengthened by five new jobs, including two more drivers, creating a team of 20 staff, drivers and attendants.

Simon Winter, Neill & Brown Global Logistics’ UK manager Portable Movements, said: ‘The new trucks are fuel efficient, load and road friendly; and the trailers and bodies are perfect for caravans which are quite fragile and not packaged for transit.’

The three DAF 105 trucks (two four-wheeled units and one six-wheeled unit), each have the new Euro 6 engine, between 460BHP and 410BHP, super space cabs and full air suspension.

The investment also includes three custom-built trailers and bodies, made by Martin Williams Trailers of Burstwick.

In total, Neill & Brown employs 130 staff at Livingstone Road, Hessle, and at Hedon Road, Hull, and works throughout the UK, Europe and worldwide providing a full range of logistics services.