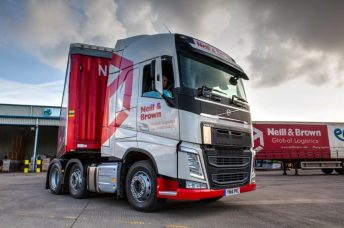 A deal between two logistics companies is increasing traffic through the Humber Ports.

The agreement consolidates traffic from Gronau-based The Green Line, bringing it through the Humber and diverting it from other ports including Felixstowe and Dover. In addition, it significantly increases the amount of Germany-bound UK traffic through Hull.

The two independently run companies have had a working relationship since early 2012 and say that the agreement will streamline the Germany/UK service with benefits for customers.

Neill & Brown’s director of logistics Carl Andrew said that The Green Line chose to work solely with Neill & Brown on their UK business due to a combination of the good levels of service and the strategic central UK location of the Humber Ports and the M62 corridor.

“We have dedicated vehicles and drivers working for The Green Line which means that we provide a solid and expert service,” he said. “Since the exclusivity agreement, shipments we receive from Germany have increased significantly in comparison to 2013, with March seeing a 600 per cent increase and April a 500 per cent increase.”

Products being shipped on trailers between the two countries via the daily service are varied and include textiles, chemicals, non-hazardous and general goods. They are transported as full loads or as a ‘groupage’ service where products from different companies are combined onto one trailer.

Colin Moody, Neill & Brown’s managing director, said: “The sole partner agreement is good news for the Humber Ports and a reflection of the excellent relationship that has developed between the two well-established companies.”

Uwe Brehm, managing director of The Green Line, said: “The traffic to and from the UK has been our strongest for many decades. We are very proud of the partnership with Neill & Brown. I am convinced that our customers in the whole of northern Germany will benefit from their reliable and knowledgeable service.”

The deal follows recent news from Neill & Brown of its strengthened European and worldwide presence with the addition of four new international partners in Greece, Holland, Turkey and Japan. It now offers 200,000 sq ft of warehouse space and employs 107 staff, mainly from its Livingstone Road headquarters.

It has also commenced development of a new £2.5m facility at Marfleet Environmental Technologies Park with assistance from the Humber Local Enterprise Partnership’s Growing the Humber fund.

The company is an official business partner of World Trade Centre Hull & Humber, a sponsor of the Yorkshire International Business Convention and a supporter of City of Culture 2017, being the first company to sign up as a Hull Angel.