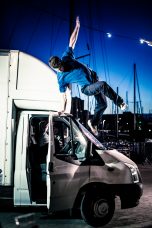 The countdown has begun.

Monday, April 7 marked 1,000 days to go until the first day of Hull’s spectacular City of Culture year. With events scheduled to take place every single day throughout 2017, this is a major milestone in the journey that will change the way the world sees Hull forever.

“For the City of Culture team, this year is all about planning, fundraising and laying the foundations for a successful year in 2017.

“As we move towards 2017, there will be lots of opportunities for everyone in the city to get involved. In the meantime, I would urge everyone to continue to support events and cultural activities that take place in the city.”

Work to deliver Hull 2017 is well underway. An interim team is in place and one of its most important jobs is raising the £18m needed to stage a spectacular and thrilling cultural programme in 2017.

Fundraising through local private-sector support, national and international partnerships continues apace. The team is well on track with building the partnerships that will help to ensure that vital funding and support is in place. With 1,000 days to go, they have already raised almost half of the overall funding target.

A major partner in Hull 2017 UK City of Culture is the BBC and to emphasise the significance of the year, the Director General Tony Hall (Lord Hall of Birkenhead) will be visiting Hull on Wednesday 16th April to meet cultural leaders and key opinion formers in the city. This is a symbolic launch of a planned partnership with the City of Culture team that will help to deliver events, programming and capacity building for the cultural sector in Hull.

Neill & Brown has been involved in the fundraising initiative, ‘The Hull 2017 Business Angels’, to further support the programme. Private-sector businesses were invited to each pledge a financial donation of £17,000 to show their support for City of Culture. This pioneering scheme has been an overwhelming success and has now been nominated for a prestigious national ‘Arts In Business’ award for collaborative practice between the arts and business.  In addition to this, Hull’s winning City of Culture bid campaign ‘Hull  2017: Tell the World’ has also been nominated for a CIPR award.

Exciting work to develop some of the major events and projects for 2017’s 365-day, 1,500-event programme is also making significant progress.

The City of Culture team is currently in discussions with a number of artists, including the visual artist, composer and musician Brian Eno and former poet Laureate Sir Andrew Motion.

Pictorial Meadows / Growing Gateways is a major ecological planting project that will complement work already being carried out by Yorkshire Wildlife Trust. It will take place in areas of Hull that have currently fallen into disuse, such as brownfield sites and urban spaces, as well as along arterial gateway routes into the city centre.

All activities reflect the key themes of the 2017 bid: Roots and Routes, Made In Hull, Freedom and Quirky, these improvements will have long-term, sustainable benefits that will help to increase footfall and boost tourism, as Hull aims to become a world-class visitor destination, as set out in the 10-year City Plan.

Hull City Council is currently in the process of setting up a culture company to deliver the 2017 programme and will soon be starting the search for the culture company’s top team.

The council will also host a public celebration to thank the people of Hull for backing the City of Culture bid and for their ongoing support. The event will take place on Saturday, June 28, as part of the Lord Mayor’s Centenary celebrations.

Councillor Bayes added: “Already, the benefits of Hull’s City of Culture status are tangible. Perceptions of the city are changing. We attracted positive media coverage worth £7m around the time of the announcement, and Hull has been listed in the Sunday Times as one of the top cities to live. Together with news of major inwards investment such as Siemens this has given the city a new confidence and optimism. This is undoubtedly Hull’s time.”