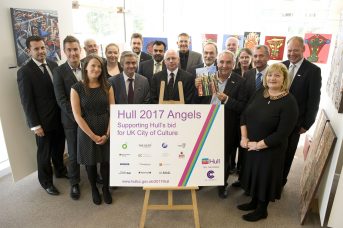 The Hull bid team left for Derry today, ready to make their final presentation to the City of Culture judges tomorrow. The bid team leave buoyed by a commitment of £17,000 each by 20 local companies and organisations to support the cultural programme if Hull’s bid wins.

Neill & Brown are proud to have been one of the first Hull businesses to pledge its support to Hull Angels. The bid team initially set themselves a target of gaining 10 business ‘angels’, but have well exceeded that goal with the six further businesses; Baker Tilly, F&T Vending, Gosschalks, Hull KR, Keepmoat and Vivergo Fuels, who have signed up to the Hull 2017 Angels initiative helping to make history for Hull’s UK City of Culture 2017 bid which has now achieved its initial private-sector sponsorship target.

The private-sector support has been secured following the launch of the Hull 2017 Angels initiative at a breakfast meeting held by the Hull and East Yorkshire Bondholders in September which focused on the City of Culture bid. Since then, the Bondholders and Hull’s City of Culture teams have worked together to secure more pledges. Should the city win, the organisations will donate £17,000 for Hull’s City of Culture programme over four years beginning from 2014, helping support the ambitious programme of Hull 2017 events.

Hull’s bid aimed to secure 20 Angels by March 2014 but has reached the target four months early and a week in advance of the team going to Derry-Londonderry for their final bid presentation.

Hull submitted its final bid document to be the UK City of Culture 2017 to government at the end of last month. A final presentation will be made to an independent panel of judges in Derry on 14 November. The Department of Culture, Media & Sport (DCMS) will announce the decision on which city has won on November 20.

The Hull 2017 Angels donations will form part of a £15m budget for the city’s proposed programme alongside local authority budget linked to the ten-year City Plan plus additional funding from grant-giving organisations such as the Arts Council; the private sector; and philanthropic giving. Hull’s bid follows a number of themes to celebrate the city including Roots and Routes, Made in Hull, Freedom and Quirky. Inspired by Larkin’s poem ‘Days’ the ambition is for each day of Hull 2017 to make a difference to a life in the city, the UK and the world. Proposed programming will include activity across 365 days with an estimated 1,500 special events.

Hull is competing with Swansea Bay, Leicester and Dundee to be the UK City of Culture 2017 after becoming a Candidate City and reaching the final four – 11 cities originally entered.

The official Hull City of Culture video, ‘This City Belongs to Everyone’, was published on YouTube yesterday and has already had over 30,000 views.

Neill & Brown will be waiting for the results on Thursday 20th November with anticipation. Hull is ‘Ready to Deliver’!