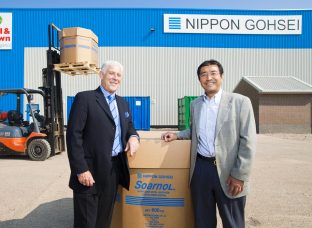 Firms combine on Hull base for world-leading food packaging product

The Japanese owned chemical company, which already operates from the Saltend Chemical Park, has seen a huge increase in demand for its world-leading product Soarnol that is used primarily by the food industry as a packaging material for preserving flavour and freshness.

Part of the new 60,000 sq ft facility at Marfleet Environmental Industries Park on Hedon Road will house new machinery for producing bespoke, compounded grades of the product, a key ingredient in supporting the shift to more sophisticated methods of food packaging.

Neill & Brown Global Logistics, which currently employs 90 people from its headquarters at Livingstone Road, Hessle, will occupy 40,000 sq ft of the total space to store and distribute Soarnol to customers throughout Europe.

Both companies will take on extra staff, initially creating 13 new jobs, 11 with Nippon Gohsei and two with Neill & Brown.

Noriaki Hamada, managing director of Nippon Gohsei UK, said that the new east Hull premises would allow the company to respond more swiftly to demand for compounded grades of Soarnol, sales of which had increased considerably.

“The partnership with Neill & Brown and the new investment will enable us to meet the requirements of customers more efficiently and provide us with more space to carry out additional research and development.”

Peter Brown, managing director of Neill & Brown Global Logistics, said: “We developed a good working relationship with Nippon Gohsei over a number of years and our business has grown alongside the success of Soarnol.

“Storage and distribution are an essential part of the new operation and the Hedon Road facility is ideal due to its proximity to the Port of Hull. We hope that our presence will attract more businesses to this key location and new area of regeneration.”

Soarnol, which is manufactured in cylindrical pellet form, is mainly composed of carbon, oxygen and hydrogen, has no toxic gases when burned, and its combustion heat is only half that of polyethylene, causing little harm to the environment. In addition to being utilised by the food industry it is also used for a wide variety of other applications, such as for plastic fuel tanks and underfloor heating.

Nippon Gohsei started manufacturing the product in Hull in 2004 after being attracted to the area due to its geographical position and the raw materials that could be sourced from BP. It has grown to employ 90 staff at Saltend.

Paul Dixon, director of Warmsale Ltd, which owns Marfleet Environmental Industries Park, said that his board were delighted that the expanding local companies had been attracted to the site.

“We were also pleased that the £2m refurbishment programme was awarded to local building contractors Houltons, and engineers Alan Wood & Partners, following a vigorous tender process.”

Mr Dixon praised the Hull City Council Economic Development and Planning Departments who, he said, had worked positively to find a solution to secure the future of the former derelict Humbrol Factory.

He added that Yorkshire Forward had also provided vital European Regional Development Funding (ERDF), without which the redevelopment could not have taken place.

“In all, it is a story of private and public enterprise working together to bring a redundant and run down site back to life,” he said.