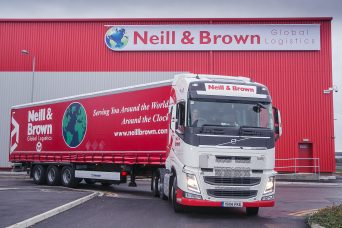 A new £2.5m warehouse is set to help shipping firm Neill and Brown Global Logistics grow its business on the continent.

Based at Marfleet Environmental Technology Park in Hedon Road, east Hull, the site was developed by 14 East Yorkshire firms.

Peter Brown, Neill and Brown chief executive officer, said his company had always been committed to working with others nearby.

Mr Brown said: “We have created a high-quality logistics facility for our international customer base using as many local suppliers as possible.

“We are proud to be based in Hull and there is plenty of expertise in the supply chain to enable us to adhere to ‘buy local’.”

The centre was supported with a grant from the Humber Local Enterprise Partnership growth group.

It will allow Neill and Brown, which is headquartered in Hessle, to seize new opportunities. The firm has been investing significantly this year.

It bought a £180,000 crane truck in July, the most expensive single addition ever made to its fleet.

A deal with German logistics firm The Green Line has led to a six-fold increase in its shipments from the country.

Mr Brown, who is also a director of World Trade Centre Hull and Humber, said: “The increased capacity and proximity of the new warehouse to the ports will provide an enhanced service to our customers and give us an edge in developing more export and import work to and from Europe.

“It also complements our primary facility in Livingstone Road, Hessle.”

The new development follows a an earlier investment at Marfleet in 2011.

The business park on the site of the former Humbrol factory is focused on green energy and technology development.

It is likely to host about 200 jobs when fully occupied. Neill and Brown is an official business partner of World Trade Centre Hull and Humber.

The company also signed up as a business angel in support of Hull’s bid to become UK City of Culture 2017, donating £17,000.