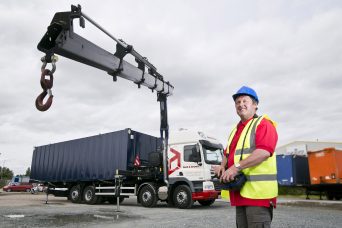 A Yorkshire logistics company that supported the US army in the weeks leading up to D-Day is set to grow on the back of soaring demand for wind energy.

In 1944, logistics firm Neill & Brown’s worked with the US army to ensure armaments used in the first stage of the liberation of Europe were transported safely.

Today, the company’s sights are set on new markets linked to our growing interest in ‘green’ energy systems.

It’s invested £180,000 on a crane mounted truck which is capable of lifting units of up to nine tonnes.

The vehicle is being used across the UK, and it has been put through its paces at several railway sites around the country. It can also be used to transport site cabins and modular buildings.

It’s the latest addition to the company’s growing fleet of 40 vehicles. Neill & Brown’s plans to acquire 35 trucks over the next five years.

The latest truck has been adapted to allow vehicles, such as forklift cherry pickers and other plant machinery, to be driven on and off using hydraulic ramps.

Peter Brown, Neill & Brown’s chief executive, said: “This is a considerable investment and is indicative of the upturn in the construction sector, both regionally and nationally, and also of our optimism in general economic growth.

“The vehicle is of huge benefit to our construction clients. We also anticipate demand from other areas of industry including onshore and offshore wind, and the wider energy sector.”

Many East Yorkshire entrepreneurs believe the renewable energy sector will provide a significant boost for their business.

Earlier this year, Siemens announced plans to base its turbine production and installation facilities in Yorkshire.

The engineering giant will invest £160m across two sites – in the Green Port Hull project and a new rotor blade manufacturing facility to be built in nearby Paull.

Siemens’ announcement is expected to lead to the creation of thousands of jobs.

The development will be operational by September and will create 26 jobs over the next three years.

Neill & Brown, which has a turnover of £19m and 112 staff, is an official business partner of World Trade Centre Hull & Humber, of which Mr Brown is a director.

The company also signed up as the first ‘business angel’ to support Hull’s successful bid to become the City of Culture in 2017.

During the war, the company represented the US army in Hull.

The firm’s finest hour came in May 1944; a fact acknowledged by a letter which is one of Mr Brown’s prized possessions.

The letter from Captain John C Diffin, who was stationed at the headquarters of the US Army’s chief of operations, is addressed to Gerry Brown, Mr Brown’s uncle.

In the letter, Captain Diffin offers “his personal appreciation..for the superior job you have turned in as representatives of the US army at this port (Hull)”.

Unsurprisingly, Captain Diffin was rather coy about the precise nature of the work carried out by Neill & Brown.

Captain Diffin and his comrades had good reason to thank the company in the following months.

Today, Mr Brown is building on this proud legacy.