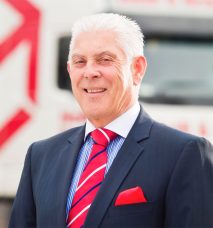 IN 1917, an Englishman and an Irishman walked into a bar. They came out, launching a business.

“I came in at 16 years old. It is amazing how the business has developed and I have been able to grow with it,” managing director Peter Brown said.

In the past three to four years, the Hessle firm has employed about 30 people and now has a workforce of 100.

But it hasn’t grown with ease.

Peter said that 20 years ago, the company’s main focus was on customs clearance but when the UK joined the EU, that part of the business ceased.

The logistics company then had to look at alternative ways to prosper. This is when it decided to look into European markets.

Now, this is a flourishing part of the group, working in Germany down to Italy, Spain and France and Western Europe.

But it isn’t forgetting about the UK.

Peter, who said he started life as an “office boy” at the firm, said: “We do a lot of work in the UK. Europe is only another destination for us. It is the same as taking a load to London.”

The growth of Neill & Brown, which also has an office in Hong Kong, has, according to Peter, been largely down to the people in the company.

Today, the business has five fathers and sons working for it – family plays a key role.

“We like to think we give an image of a family company but can offer the services of a larger company,” Peter said.

“But we don’t want to lose our family values.”

Over the years, Neill & Brown, which has a 40-strong fleet, has had different homes across the region. The business has been in its current Livingstone Road site for 22 years and over the past 15 years, it has had the chance to expand these current headquarters.

The company bought three acres next door, which was home to Dunston Ship Repairs, to make the warehouse larger.

It now has about 25 vehicles on the roads every day and also has a presence at Marfleet Environmental Technology Park in Hedon Road.

The company joined forces with leading Japanese chemical company Nippon Gohsei in 2011 when they both became the first tenants to move on to the iconic industrial site after joining forces in a major development of new laboratory, manufacturing, storage and distribution facilities.

Neill & Brown is also a partner of the World Trade Centre Hull & Humber, with a key aim to help companies venture into the exporting market.

As a business already working solidly in the exports market, Peter is passionate about helping other local companies succeed overseas.

“We do everything we can at the World Trade Centre to get companies to export,” Peter said.

Because of Neill & Brown’s commitment to exporting, the business has decided to give advice and talk to companies who are looking to export.

Peter said: “We believe in inward and export investment.

“Neill & Brown has been in Hull for 95 years, so it was time to try to put a little bit back.”

Peter, who is originally from Hornsea, is a gleaming example of someone flying the flag for the city.

He said: “We’ve got some blooming good companies in Hull.

“People are always knocking Hull, but it is good. There are opportunities out there.”