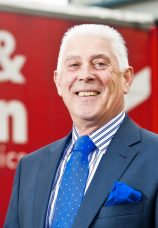 The head of one of the region’s leading logistics companies has been appointed a director of World Trade Centre Hull & Humber.

Neill & Brown became a partner of the World Trade Centre shortly after it being taken under private sector ownership in December 2011, and has since contributed financially and strategically to the running of the centre.

Carolyn Burgess, chief executive of Language is Everything, said: “We are really pleased that Peter has agreed to take on this new responsibility. His business acumen and vast knowledge of local and global markets will be invaluable to us.”

Peter Brown said: “I feel it is important to support initiatives that aim to boost the regional economy, and I am very happy that my experience of international trade will help more companies in the region to consider new markets.

“The success of the World Trade Centre proves that collaboration brings results. We have a strong role to play in complementing the work of organisations such as the Humber LEP, the Bondholder Scheme, UK Trade & Investment and Team Humber Marine Alliance, all of which are based at the centre, and I will assist in getting the best value from this unique grouping of organisations.”

Neill & Brown Global Logistics, which currently employs 90 people from its headquarters at Livingstone Road, has created 10 new jobs over the last few months despite the tough economic conditions.

The company is a member of Hull & East Yorkshire Bondholders and a patron of the Lincolnshire Chamber.